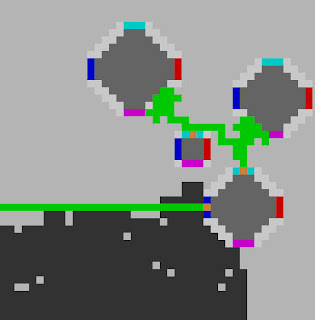 When fixing a bug that didn't draw walls when partially on cavern area (that dark mask on picture) a new bug appeared. As you can see corridors (green mask) don't really behave that well when trying to find a way in a round room. The reason is diagonal "corner" mask (white) which corridor routine avoids when it tries to find a straight wall (colored ones). This bug could be fixed with pathfinding I guess.

It's not unusual that fixing something creates new bugs, because of the complex relationship between different parts of the dungeon generator.
Posted by Krice at 02:22 2 comments:

Fixed some bugs today and added new ones in the bug list. I should probably make a better list of bugs, because they aren't going away. I think I have been too condifent that re-factoring the source code is going to remove bugs like that. In fact removing bugs is re-factoring and it's maybe the best kind of re-factoring, because you create solutions that just works and not a perfect source code that is supposed to work (that rarely happens).

It's been really windy all this day. It's not usual in this part of world. Like what the heck is going on? To make it more annoying our rooftop is loose and it's banging against the roof all the fucking time.

This day sucked at work, too. I was given a job as an officer to EU election (some lucky bastards get elected to EU parliament and get like shitload of salary). EU is shit, it's going to fall down in couple of years. So, there I'm sitting on a chair for FOUR hours and waiting for people to come and vote for those bastards. The pre-election lasts a week and I have four days, each having 4 painfully long hours left.

If that is not enough my prostate is killing me. It's been bad since last christmas and this is no joke. When it's going chronic you just have to take it like a man. I should go to doctor, but I'm not sure they can do anything.

0.4.6 was the last released version. I remember it now, because I found all release versions from old computer. I was amazed how playable that version was. Everything seemed to be fine, but I remember how stuck I was at that moment. The dungeon generator was hard coded for one level theme, which basically had almost all features mixed together.

It was somewhat painful to notice that it had more playable content than the current version.
Posted by Krice at 01:16 5 comments: