Some level themes have important rooms which has to be created. I was thinking of returning a room type from the order of rooms made, but it failed. The reason is the way I'm creating corridors first, then rooms in the center of corridor nodes. Sometimes nodes are too close each other and one (or both) of the rooms is not made. This kind of creation makes it impossible to make sure that the first room theme is created.

So it's back to planning. I do have special rooms which are created after other room types. I had planned it for shops and rooms like that. But it can't be used in this case, because important rooms must come first and everything else created around them. In best case scenario I'm able to use old special room routine, just place it first before other rooms are created. All that and more will be revealed in the next episode of Kaduria - The Blog.
Posted by Krice at 01:45 No comments: 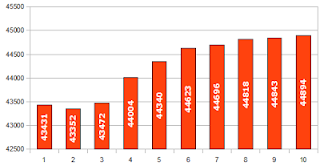 This LOC chart is recorded from random points of the last year. It shows some kind of progress in lines of code, but is not equivalent to real progress (which is slower). The problem areas in the source code are now kind of distilled to a number of difficult puzzles I have to solve one at a time. It's slow, slower than any regular game development. If there is one thing I'm happy about it's the extremely low number of bugs, thanks to my ridiculously strict and ultraprofessional programming style. Unlike many developers I don't have to waste my time fixing bugs, but I do have more problems with algorithms and larger program flows than any regular math-aware programmer. In the next exciting blog text I'm hopefully going to tell good news about level themes.