The other day I was trying to do something, but instead spent the whole day on internet trolling forums. If you want to get anything done it's not going to work like that, so I have decided to stay away from internet every other day. In my day off from internet I actually had to think how to spend my time, because it wasn't wasted on trolling. Fixed eight bugs in Kaduria which is phenomenal. But it's not just programming, you have more time to practice guitar playing or do some other real life stuff.
Posted by Krice at 00:20 No comments:

Sidetracked for two days with a small programming project (I call them "java button" projects) and somehow lost interest to programming. It will pass and I have already been checking out what to do next in Kaduria. It doesn't look very promising. Most things to do are between hard and difficult. I'm getting back to the issues that need serious thinking and game design instead of simple programming to make stuff work. One strategy I have been thinking is work the way from player's point of view to downward in the structure. In other words make the player's actions top priority and monkey them down to other actors of the game.
Posted by Krice at 09:52 No comments:

Item class has only 12 functions left to complete. Some items can be trapped and for a long time traps gave me constant headache in the way I was trying to implement them. The confusion was caused by the type of traps. Some of them are actual objects hidden on ground, while others are a part of another object. Also, I had difficulties to understand how to implement the effects of traps. If I can handle traps then the entire object system is much closer to be complete, because traps are one of the unfinished parts that affect several object types.
Posted by Krice at 07:17 No comments:

Testing the game while creating it may be a good idea in most of cases. However I now think that there is a place and time for testing, too. Kaduria has seen a lot of refactoring and testing that was done then was a huge waste of time after all. The funny thing is that I never questioned my style of programming until now. I also have a habit to compile maybe too often. It's another way to waste time, since in most of cases compile happens without errors. It would be obvious even after longer sessions of writing code.

These two, testing and compiling, are things that I try to cut down to stop wasting time for no reason. Testing in this state of development should be done actually when the gameplay is more or less ready.

Here is the new gameview I was talking about earlier: 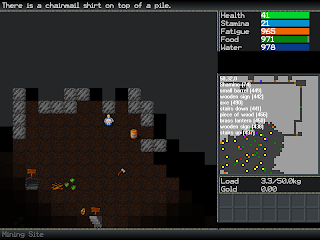 Two sections of right side area still missing. I'm thinking of leaving the "mini"-map (it's a debug version routine), but without object list (or show only monsters).
Posted by Krice at 01:46 2 comments: