Finished automap tile data refactoring for all objects that had automap tiles. Some new tiles are required for new objects. 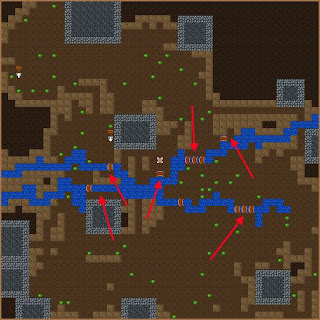 Now when I can see ground objects from the automap I noticed that bridges need more logic in the creation. In that screenshot most bridges lead to "nowhere" in small area of the level and some are generated right next to each other. This one should be quite easy to fix, just check out the sides of the bridge and also what's in the direction of the bridge. Those green spots by the way are the old bush tiles. I found out that there already was 50 automap tiles for ground objects. I did remember them, but they were in a separate tileset that was not loaded until now.
Posted by Krice at 05:27 No comments:

With the current version of cave generation I'm letting rooms connect to walls of another room. I'm hoping that by allowing this it's possible to create almost town-like dungeons just by creating lots of rooms in a small space. 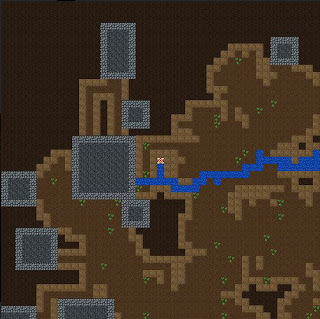 This is a section of a cave theme level view in automap. Those green spots are bushes... it's a start of more generic plant generation, no other than bushes are generated at the moment, but it will be a jungle when there are more plants. It's all getting back slowly. Rooms, corridors, stuff like that.
Posted by Krice at 10:27 No comments:

I had the room creation switched off for a while, because I was re-inventing the wheel in how the rooms should be placed. 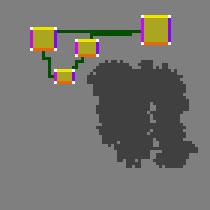 The first thing I noticed was this. It's what we professionals call "island creation". Two systems are created separately and don't connect to each other. In this case caverns and dwarf-made rooms. Well, I guess this could be quite easy to fix, maybe check out if connection was made and if not, use a connecting corridor from one of the rooms or corridor tiles. I think a corridor will usually cross a cavern area, but things like this will happen sometimes.

By the way, I still have to figure out how to prevent corridors meeting a room at sharp corners, creating impossible situation for entrance/door creation. Yes, I know, this is something that I have worked on for a while...
Posted by Krice at 03:56 No comments:

During the creation process I have started to form a history for Kaduria. It's loose and I don't know the exact details myself, but I'd like to tell something about it.

As everyone knows Kaduria was constructed by dwarves, like Moria too. But that's only half true. In fact there was an older dungeon built by ancients. (You got to have ancients, because they are cool.) From this process there are still places and items left that are clearly something different than what dwarves made later. Then, who were the ancients? Were they elves or maybe dwarves that were more advanced in metal handling? Or could they have been humans? I like to keep that an open question.

There were also two other ancients. First of them is well known and there are still people left from the tribe that once inhabitated a part of Kaduria. Then there were also a third kind of ancients, who possibly were the oldest of them all. They were the ones who built the twilight gate.

So there is lots of ancient crap to be discovered. Powerful weapons and treasures. Dwarves were not interested in searching the dungeon when they took over. For them Kaduria was a place of mining operations. They couldn't care less about the ancients or the junk that was hidden somewhere. But dwarves were concerned about the twilight gate and it was hidden by them.
Posted by Krice at 07:52 1 comment:

I think it could be interesting to start tracking the LOC count from each day I'm programming Kaduria. The current LOC is 40 609 which includes everything like comment lines. When I get ten days of data I'm going to make a graphical summary and post it as a blog entry. It will blow minds.

In the latest ADOM blog entry Thomas Biskup wrote that ADOM has 150 000 lines of code. That's crazy! It's over three times bigger than Kaduria. And not just that, I seriously doubt that Kaduria will ever be much over 50 000 LOC. But then again, Kaduria will be a simple farming simulator and not a real roguelike game anyway.
Posted by Krice at 05:39 No comments: